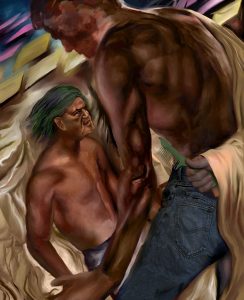 In this imagined world, we follow Bill, Newt and friends from their high school graduation through the many cultural and personal events that shaped their lives and the times. 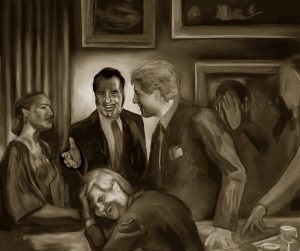 Nixon, the father who defined friends and enemy lists, introduces Bill to Selena, while Newt  sits across the table showing signs of his betrayal to Bill.

Everyone is embarrassed since Bill is a known womanizer.

Newt has a drink with John, the bad boy who feels the no shirt, no shoes rule does not apply to him

The events and people described in the images are condensed from current events. Media news and personal situations are fused and dramatized. The people become collective or composite figures. A loose distinction is made between what is photographed or painted. Lines blur between what is public or private, and between what is real or imagined.

As a child, I was exposed to the richly hand painted photographs of Lands and Peoples Encyclopedia. The images in the encyclopedia were very rich and painterly. Many of the photographs had been retouched and colored with gouache or oils. Much of the retouching and coloring was so loose that I was unable to tell if many of the images were paintings or photographs. As I grew up, I copied many of them in pencil and later in paint.

The exotic images in Lands and Peoples Encyclopedia are reenactments of everyday life in other countries. My images are reenactments similar to events in my own life fused with events I see in the media everyday.

Working digitally, it is easy to blur the distinction between photographic truth and painterly fiction.

In the series Imagined Events, I have worked freely between digital painting software and photography. With the use of a Wacom digitizing tablet, I fuse drawing, painting and fragments of reality pulled from photographs. Software programs such as Adobe Photoshop, Fractal Design Painter and Caligari Truespace 3D were used to create, edit and synthesize the images.

The Lands and Peoples Encyclopedia are filled with exotic images of people reenacting rituals and scenes from everyday life in other countries. In my digital prints I create a world similar to my own but I also blur the rituals and patterns I see in the media. I look for patterns to events in my life and the mediated world of the news. I not tried to recreate the news but to create a fictional dreamlike facsimile of this world.

A recent reading of On Dreams by Sigmund Freud was also an influence on the works. On Dreams was written by Freud to help popularize the theories he presented in more depth in Interpretation of Dreams. Freud's influence on the French Surrealists during the 1920s is well documented. His explanations of pictorial situations found in dreams were what interested me. Dreams include the condensation of similar events, the inclusion of distorted or disguised motives, and often simple wish fulfillment.

Freud also discusses the concept of the "collective" or "composite figure" found in dreams. One person might have the features or characteristics of two persons. One person might have adopted the name of another person. I have also found that the "composite" figure can also be seen in the earliest representations of man. These include the syndetic "Shaman" drawing in the Lascaux cave in France. One of the very few drawings of a human in the cave, the "Shaman" is a composite of various animal body parts joined with those of a man. The figures in my work are often composites of people. These composites include people I have known and people found in the media such as President Clinton and Speaker of the House Newt Gingrich.

Freud talks of a dream condensation of recent events when the events are similar in nature. Dramatization and distortion result as the mind tries to fill in the gaps between otherwise incongruous events.

"She tried to free her man in a court of law and in the parking garage"  can be read as a condensation of events. I found myself haunted by the image of a woman I had seen in the laundromat The young woman was somewhat distraught and strangely distant as her sisters and mother tried to console her. The woman radiated a feeling of inner peace that was in direct conflict with her forlorn expression. A few days later I was surprised to see a photograph of the same woman in the paper. She had been shot and killed by police while trying to "free her man" in the courthouse parking lot as he was being moved to a new location. My new image began as a dramatization of law being decided on the courthouse steps. Her attempt to defy our social contract as it came into conflict with her desire to free her husband became my subject. The image changed as I began to redraw it. I included other symbols of law and disorder. In the print, I have included the faces of those who want to challenge and redefine the legal agreement we use to cooperate as a society. The faces of the Nichols brothers, David Koresh and Kenneth Starr have become tattoos and leaflets.

In "The law closed in on Edgar and the poets and we could see who was guilty" we see Lewis Carroll's Alice pointing at a Michael Jackson type figure. We see the artist as pedophile caught by an encroaching social contract. Law is represented by the Speaker of the House. In real life, the Speaker has expressed that a number of artists receiving money from the government are deviants. But as this witch hunt expands, it is not deviate behavior but diversity that suffers.

The confusion of a daydream is often best represented for me in quick drawings that come entirely from out of my head. Some images start as a drawings where I weigh the anxieties of my temporary dilemmas. As I begin redrawing an image to make it more realistic, changes are inevitable.

"Celebrate the moments of your lives"  started as a napkin drawing and as a free flow of unrepresented anxiety as I sat in a Kinko's at 3:00AM with a friend who was about to leave for Chicago. My drawing was simple wish fulfillment. I tried to try to make the person stay or at least feel comfortable leaving and coming back. As I redrew the image trying to make it more realistic, it changed. The dramatization extended to become the president of the United States and a celebration of the moments of his life. In this case, the president presents a ring to his future bride. The image mimics Rubens exaggerations of the events of the life of Marie de Medici.

"...every dream without any possible exception goes back to an impression of the last few days"
Sigmund Freud, On Dreams